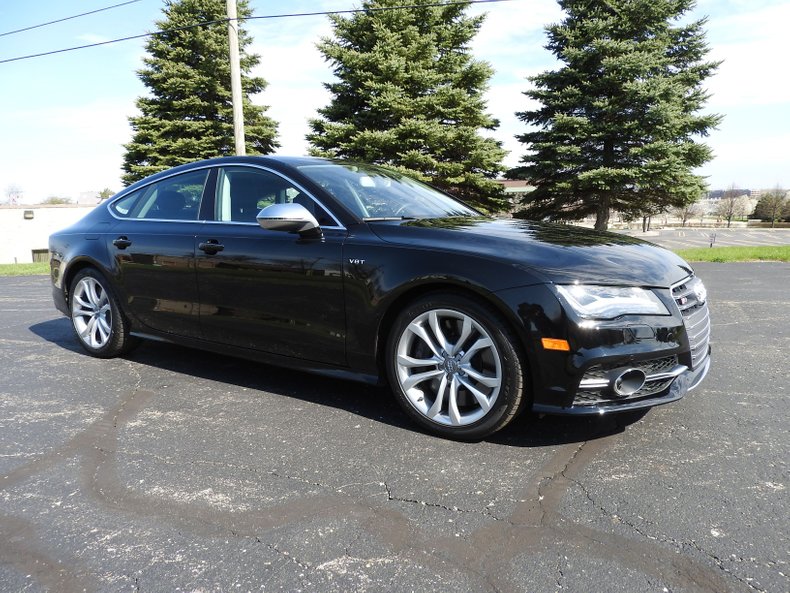 This spectacular two owner Audi S7 Quattro Prestige has been meticulously cared for from day one. The beautiful paint sparkles and the flawless leather interior presents as showroom fresh. Check out the list of incredible features and options on this car. Technical Specifications 4.0L TFSI Twin Scroll Twin Turbo & Intercooled V8 420 Horsepower @ 5,500-6,400 RPM 406 lb.ft of Torque @ 1,400-5200 RPM Audi Cylinder on Demand Technology 7-Speed S-tronic Automatic Transmission w/ Sport and Manual Shift Modes Quattro Permanent All Wheel Drive w/ Sports Rear Differential 17 MPG City / 27 MPG Highway 19.8 Gallon Fuel Tank Capacity Factory Packages Brilliant Black Black Leather Interior (Included) Comfort Seating Package ($1,950.00) Multi-Contour Comfort Front Sport Seats Valcona leather interior Comfort Rear Seats Ventilation & Series 1605. 130 bhp, 320 cu. in. L-head inline eight-cylinder engine, three-speed manual transmission, coil-spring independent front suspension, live rear axle with semi-elliptical leaf springs, and four-wheel hydraulic drum brakes. Wheelbase: 139 in.
Offered from a prominent private collection\nElegant, one-off British coachwork on a grand American chassis\nBuilt for Canadian liquor baron Harry Hatch; documented history\nFeatured in Dennis Adlers Packard and Hugo Pfaus The Coach Built Packard\nTHE HATCH PACKARD
Once a year in the late 1930s and early 1940s, the heady days before the war, a sleek one-of-a-kind formal Packard traveled down the two-lane highways of the East Coast, descending from north to south. At the wheel was a liveried chauffeur, Walter Bibby, who wore his impeccable black uniform from the time the car left the gates of 38 Roxborough Drive, Toronto, until reaching his employers winter home in Palm Beach, Florida. He would then change into more appropriate livery for the Florida coastcream linenand collect his employers at the rail station. Harry C. Hatch and family had arrived in Palm Beach flush with the wealth that had come from leading the Hiram Walker distillery through Prohibition. Vacation could now commence.
A passionate breeder of racehorses, Mr. Hatch was not necessarily a car guy but was most certainly a connoisseur, whose good taste showed in his selection of a senior Packard, the 139-inch-wheelbase 1605 Super Eight. He had the chassis shipped for coachwork to London coachbuilders Barker, the favorite of royalty, which built a formal Sedanca deVille with the razor edge roofline and turtledeck rear-end styling distinctive of their Rolls-Royce designs. In fact, aside from the typical Packard grille and fenders, it would have been easy to mistake the Hatch Packard for a Rolls!
As Hatchs son Clifford recalled later, his father had business in England, including importing Scotch, which likely resulted in a visit to Barker during one of his overseas trips. Barkers original sketch of what is believed to be this car, but without side-mounted spares, appears on page 204 of Hugo Pfaus The Coach-Built Packard.
The car was apparently sold by the Hatches around World War II and, in 1961, was sold by a Toronto dealer to longtime enthusiasts George and Sheila Van Nostrand, of Keswick, Ontario, who kept it for several years in good original condition. It was purchased by Ed Suddarth in 1986 after several documented intervening owners, and he completed its restoration and displayed the car at the 1989 Pebble Beach Concours dElegance, winning a class award.
The Packard was acquired in 1990 by Richard Livoni, of Long Beach, California, who continued to show it for many years, achieving CCCA Senior number 1761 with 99 points in 1993 and numerous First Place and Best in Class awards at West Coast concours delegance. In Mr. Livonis care, the car appeared in an article by Dennis Adler in the May 1993 issue of Car Collector, as well as in Dennis Adlers books Packard and Speed and Luxury: The Great Cars.
The present owner, a respected American collector has maintained it to an extremely high standard and hasa wonderful collection of fascinating documentation, interviews with Hatch family members, and copies of articles featuring the car, which accompany it today. It has continued to return to Pebble Beach on occasion, most recently in 2009, and is as striking today as when Mr. Hatchs chauffeur first drove it in Toronto. The correct black paint is rich and lustrous, while the interior is swathed with Connolly leather for the driver and soft broadcloth for the passengers. The rear compartment boasts twin lighted vanities, an intercom, a unique power-operated rear window shade, andbut of coursea built-in bar.

Thank you for your interest!

We'll get back to you soon!