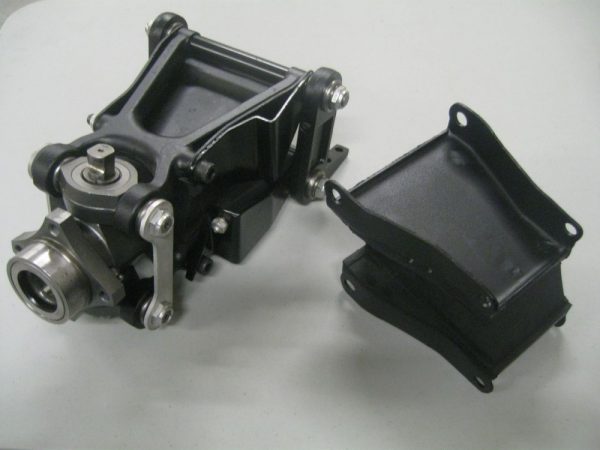 The Tucker Torsilastic Suspension is one of the many unique features of the Tucker Automobile. While almost all cars of the time utilized either a metal coil or leaf spring suspension, Tucker opted to go in a different direction. They chose the relatively new technology of Torsilastic rubber. The word Torsilastic comes from the combination of Torsion (the action of twisting) and Elastic (able to spontaneously resume its normal shape). Tucker engineers used molded rubber units bolted to the chassis and suspension instead of metal springs of any kind. Tucker described this configuration as providing superior ride and handling. However, it proved to be very problematic from the start. The company used 3 vendors to produce the specialized Torsilastic units. They were United States Rubber, Firestone and B.F. Goodrich. It was noted in early documents that the B.F. Goodrich units failed more often than the others. Ultimately, the weight and stress from cycling the suspension resulted in the rubber delaminating from the metal surfaces and in some cases the rubber itself tearing.

The first 25 cars had a shear-block style unit in the front suspension. This was a molded rubber slab laminated between two steel plates and mounted between the upper and lower control arms. This would provide resistance via a shearing motion between the suspension arms. This early configuration exhibited superior handling characteristics compared with the later tube style units that replaced them. The reason being is that the early set up allowed for solid mounting for all of the control arm pivots and the later design did not. Additional problems plagued the handling of these cars as there we no adjustments for caster or camber. The early shearblock was abandoned as failures persisted in sagging suspension and complete failure from torn rubber.

Beginning with car number 26 they began using a tube style Torsilastic unit on the front. These were shorter than what was used on the rear and had flanges on either side of them to connect to the lower control arms. While the sagging problem appeared to subside, new handling problems emerged. This resulted from the relatively unrestricted movement of the lower control arm as it pertains to keeping the lower control arm in alignment. This was most apparent under cornering, braking and road undulation. These units were also prone to failure due to poor adhesion of the rubber to the metal tubes and the rubber compound tearing after many cycles. There were also manufacturing issues that caused air pockets to be molded into the low-pressure areas of the rubber filled tubes. This resulted in further failed units.

The rear suspension design remained the same for the early and late cars with the exception of the first 8 cars. They had trailing arms that were 2 inches shorter then those that followed. All cars (except the Tin Goose) used a long Torsilastic tube welded to a trailing arm on one end and a shock absorber on the other end. Tucker experimented with the length of the tubes, trying to tune in the optimal size for the best ride. That resulted in cars having different size tubes installed in them. I have even seen some cars that had 2 different size tubes on the same car. These tubes exhibited similar handling issues as the late front units. Also like the late front units, the rears also had no fixed accommodation for maintaining consistent suspension geometry. Since the same technology was employed in both front and rear units, these also failed due to the loss of rubber adhesion and the structural failure of the rubber compound itself.

The result of all of this has left many cars in inoperable condition. Over the years many innovative attempts have been made to modify the suspension to use coil over shock, leaf spring and even steel torsion bar adaptations. These were the best solutions for Tucker owners who needed some useable repair to get their cars operable again. While some of these configurations were able to get the cars on the road, none were able to duplicate the ride Preston envisioned for his car.

After years of research and experimentation we have developed a robust rubber compound and adhesion technology that properly replaces the failed Torsilastic units with a contemporary, durable solution. These units replace the originals, look correct and operate as the engineers’ original intended. This solution addresses the most problematic issue that has kept many Tuckers from being road worthy and is no longer an obstacle to enjoying a drive in these incredible cars. Driving a Tucker with properly function Torsilastic ride is an amazing experience. It drives unlike any other car.